Bright business: Bus tours and matinee shows at the Cabaret at Studio B help drive business in downtown Albion

Bus tours started July 24 for matinee shows with a group from Rochester coming in. Ami Sidari, owner of The Cabaret at Studio B, said the bus tours worked just like she hoped; the visitors used the local restaurants — in particular 31 Problems — and because the day was so beautiful, they explored the downtown before going to the show, which went off without a hitch.

The next day the leader of the group called Sidari and said she heard rave reviews of the day — everybody was happy and there was no complaints at all, which is rare — before booking another show with Sidari immediately.

“My goal for that is for the whole community to reap benefits of having new customers on our sidewalks,” she said. “My star performer is Mr. Gary Simboli, and he is a born and raised here in the community, so everybody knows him. He’s more than just community — he teaches in our music department here in Albion.”

Sidari said Simboli already gives a lot to the community, but to have his own show is neat.

There will be six matinee shows, which Sidari said is really cool because it is bringing people in.

“I really, truly feel like revival is our midst here. Our downtown is having a lot more great stores which are opening up,” she said, adding everyone has a small part to play into the big picture. “We are networking, trying to make sure everyone is aware when new faces are going to be in town so we can show our best.”

The idea for bus tours came about from the knowledge a friend of hers, Marcy Downey, performs for bus tours up at the Village Inn very successfully. With the struggling Albion downtown, Sidari said she felt the village could benefit from something similar in the village.

“I’m not going to do the same volume of people the Village Inn can accommodate, and my hats go off to The Village Inn because they do an amazing job with the music and everything,” she said. “We are just doing our show. We’re not doing any meals here or anything.”
​
Not only will The Cabaret at Studio B be doing bus tours, but Sidari is working to add in a new studio called “Studio C.” This new studio can host dance classes when the season begins in the fall, allowing for the cabaret to still be set up. Her goal is to have the room up and running by the end of fall.
​thedailynewsonline.com/bdn01/bright-business-bus-tours-and-matinee-shows-at-the-cabaret-at-studio-b-help-drive-business-in-downtown-albion-20190806 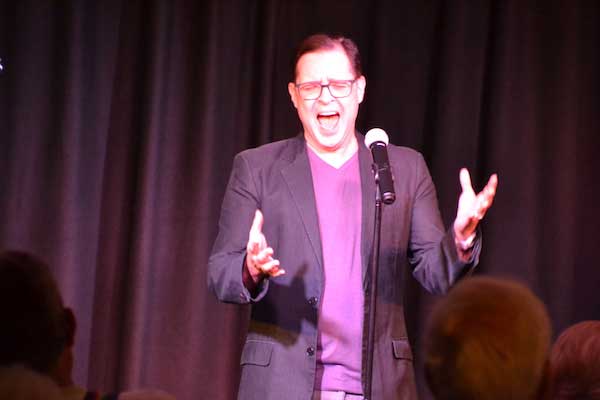 By Tom Rivers, Editor Posted 11 August 2019 at 9:28 am
ALBION – Matthew Mooney sings “Anthem” from the musical, Chess, on Saturday evening at the Cabaret at Studio B in Albion. Mooney a 1993 Albion graduate, was one of about 20 alumni to perform in a benefit for the Albion Music Boosters.
Mooney is active in the Buffalo theater scene and also works as a CNA for Catholic Health. He is studying to become a registered nurse.
Mooney also sang “I Can See It” from the musical, The Fantasticks.
There were two performances by alumni on Saturday of “Celebrating Home: Where Greatness Began.” It is a first-time fundraiser.
The Music Boosters support the music program at the elementary, middle and high schools. The Boosters fund scholarships for the honors choirs/bands, pay for year-end celebrations, and other efforts to help the music program. 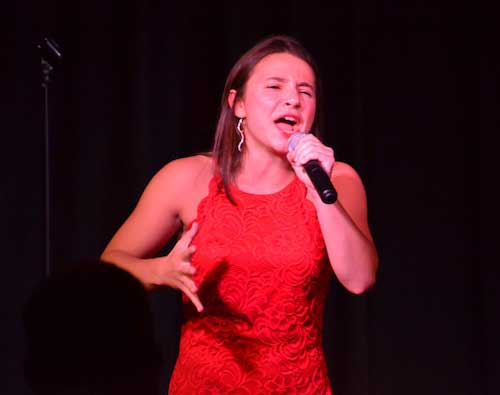 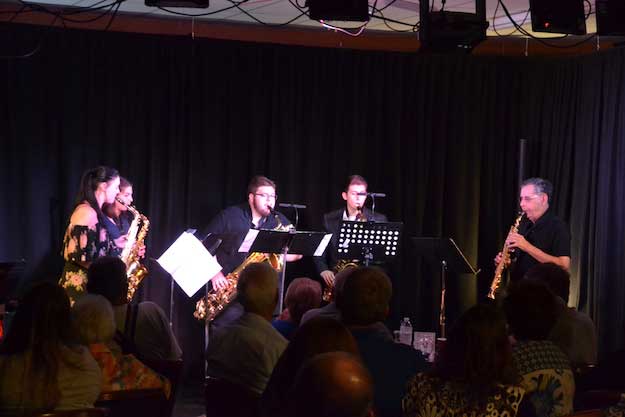 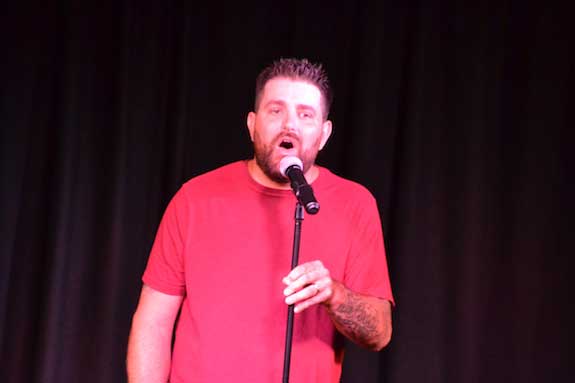 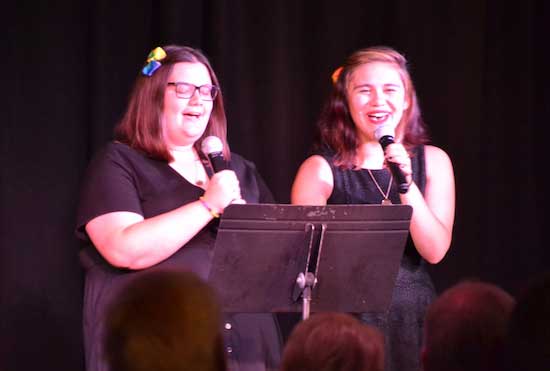 Miranda Allen, left, and Cheya-Rain Eagle, both from the Class of 2016, sing, “Get Happy/Happy Days are Here Again.” Allen is majoring in mathematics in college and Eagle is studying to be a music therapist. 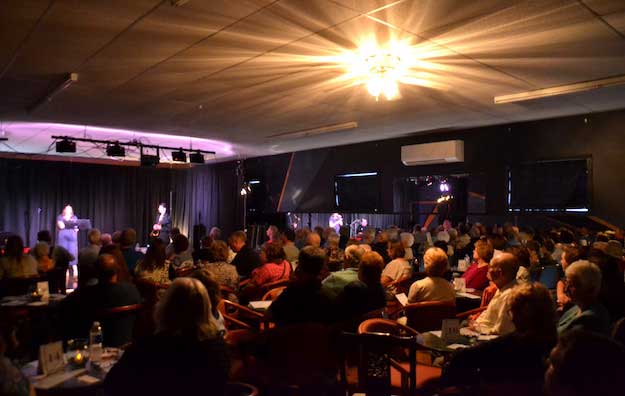 Riley Seielstad, Class of 2018, performs to a sold-out crowd at the Cabaret at Studio B. Riley is singing, “Summertime.” 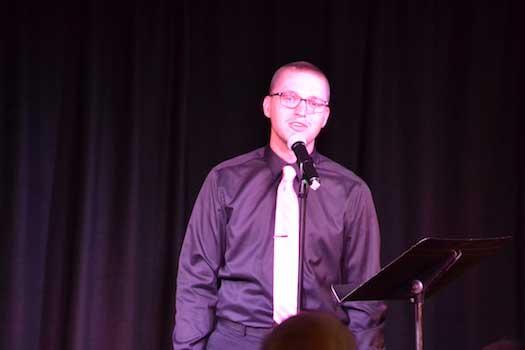 Justin Barleben, Class of 2009, sings “Smile” from Charlie Chaplin. He is a teacher in the Buffalo area. 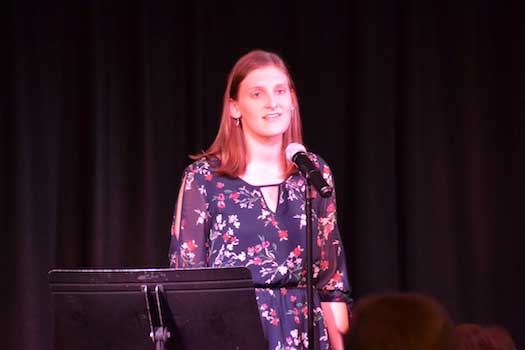 Kathleen (Adduci) Barleben, Class of 2009, performs “The Secret of Happiness” from the musical, Daddy Long Legs. She also is a teacher in Buffalo. She and her husband Justin sing with the Buffalo Philharmonic Chorus.

The Billies, a barbershop quartet with members from the Class of 2019, sings, “Beyond the Sea.” They include Jacob Ettinger, Nate Grammatico,  Enoch Martin and Evan VanAmeron.
Other performers at the concert included Alec Sherman, Class of 1968; Gwendolen Martillotta Ferchen, Class of 1991; Mike Thaine, Class of 1986; and Gary Simboli, Class of 1981.
​
​
​orleanshub.com/albion-alumni-perform-in-concert-at-cabaret-to-benefit-music-boosters/

Cabaret has 21 shows lined up this season, including 6 bus tours for Gary Simboli 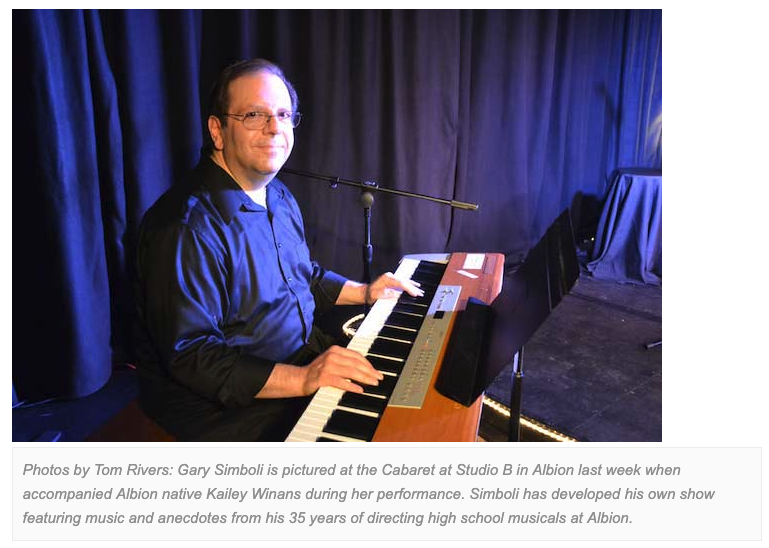 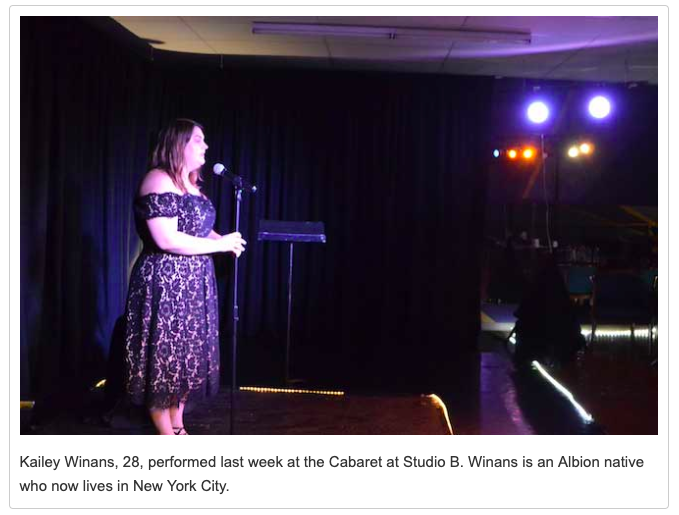 Albion native Kailey Winans kicked off the summer season at the Cabaret last Friday with her show, “Dare to Dare … Happily Ever After.”

Winans, 28, performs in New York City at the Don’t Tell Momma cabaret. Her full-time job is as a nursery school teacher at Rockefeller University.

She graduated from Albion in 2008 and credited Simboli for developing her passion for music.
“I’ve learned pretty much everything I have about being a performer from him,” she said. “He would do everything he could for his kids. He is very selfless.”
​
Simboli accompanied Winans during her show last week and sang a duet with her, “It’s Now or Never.” 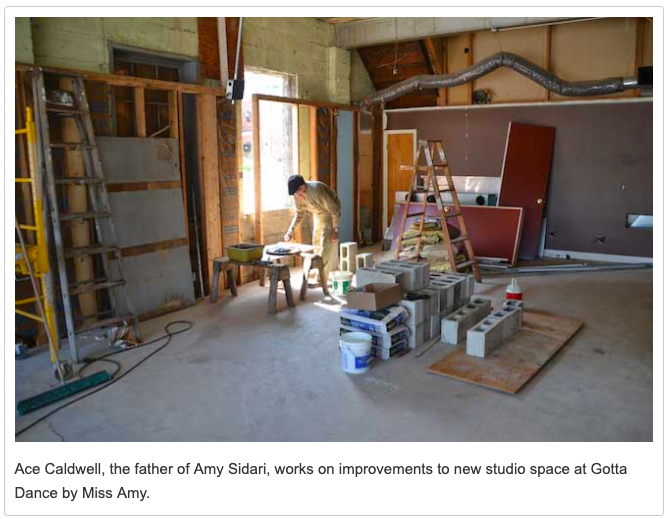 Sidari is working to upgrade a third studio room at 28 West Bank St., where she has had her dance studio for 22 years. That new room will be multipurpose for dance, a “green room” for the performers to get ready, and also can be space for pop-up shops.
Her grand plan is to renovate the top floor of her building for the cabaret, which would expand the seating from the current 80 to at least 125.

Simboli is planning to retire as a teacher in the three years. He would like to perform at the expanded cabaret and cook for people as part of the event space. The new cabaret would lend itself to bus tours, and would be a draw to downtown Albion.
The next show at the Cabaret is this evening and features Crandall, Wood and Main. The show calendar then includes Enoch Martin, a 2019 Albion graduate, on July 19. Kerri Lynn Slominski, a Kendall graduate, will do an operatic show on July 27.

Click here to for more information on the shows.

After serious car accident in December 2016, NY's "Queen of Country Music" is back on stage